When One Woman Succeeds, We All Succeed

Foundation
Caryl M. Stern
From small gestures of support to active and intentional mentoring, women have a responsibility to lift each other up

There is a jar I keep in my office that holds little shards of broken glass. A friend of mine sent it to me after I was named Dean of Students at Polytechnic University in 1985. I was in my 20s at the time – and the first woman to become dean at the school.

A local newspaper published an article when I got the job, under the headline, “Sex Barrier Falls at Polytechnic.” The message my friend sent with the jar of glass was more direct and symbolic. It simply said, “Pieces of the Ceiling.”

When asked about the importance of women supporting women in the workforce, I think about gestures like that and how important – how empowering – it is when women lift each other up.

I began my career when it was commonly believed professional women were not good to each other, that we would compete with one another to get ahead.

That has not been my experience at all.

From my first job out of college to my current role as executive director of the Walton Family Foundation, I have benefited from the wisdom, grace and advice of countless friends and mentors who understand that when one woman succeeds, we all succeed.

Early in my career at Polytechnic, I worked hard to fit in with the men in leadership – and they were almost all men then. I studied football and learned to play golf like the guys until an older woman at the school took me aside.

“If they wanted to hire a man, they would have,” she told me. “But they hired you. They wanted a woman. Don't feel like you have to be like them to fit in.”

It was great advice.

I have tried to hire young, bright women over the years and offer some of the wisdom I have gained through my own experiences.

Later on, when I became CEO of UNICEF USA, I was invited to a dinner in Manhattan by Desiree Gruber, who is CEO of Full Picture. There would be about eight other women, she said, and I should come prepared to talk about the one thing I was most worried about in my new job.

When I got to the restaurant, I realized the dinner was set up just for my benefit, and this group of women – all CEOs themselves – had gathered to offer advice and be my sounding boards.

They stuck by me throughout that first year and to this day. For many years, every time a woman became CEO of a nonprofit, I would often host those welcome dinners to celebrate the moment they broke their own glass ceiling.

There's a Yiddish expression, to “kvell,” when you feel pride because something good happens to somebody else. The women who have supported me over the years kvelled when others succeeded.

I saw that joy they got from the success of another woman – and I selfishly wanted that joy, too.

Because of that, I have tried to hire young, bright women over the years and offer some of the wisdom I have gained through my own experiences, while leaving room to learn from them at the same time.

Every successful woman has ... failed at some point, but they have also figured out how to pick themselves up, dust themselves off and keep going.

I am also still learning.

I have interviewed hundreds of women leaders – from fellow CEOs to the head of my kids’ PTA to the woman who organized coffee at my synagogue – so I could discover and share the secrets of their success.

At the foundation, I am proud to be part of a leadership team that includes several talented women who inspire me daily with their passion for doing good and their pursuit of solutions that create access to opportunities for others.

Our new five-year strategy champions community-driven change, emphasizes greater collaboration with partners and prioritizes diversity, equity and inclusion. Our work must reflect and be led by the voices and needs of the communities we serve – including the strong women working to build a more equitable society.

Over time, I have discovered that every successful woman has one thing in common – they have all failed at some point, but they have also figured out how to pick themselves up, dust themselves off and keep going.

When I think about how women can best support one another, I think of two things: We need to kvell – and we need to help dust each other off.

That’s a role all women can play as friends, mentors and colleagues. 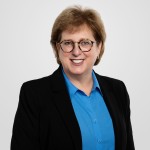