“Jazz is communication, above all else,” says Ryan Yumang, a 16-year-old saxophonist with the NWA Jazz All-Stars Youth Ensemble, an 18-piece big band that pulls members from the best of the region’s high school music programs. “I might be soloing, and the rhythm section is responding, and I call back. It’s just a really cool dialogue.”

Ryan is a rising junior at Har-Ber High School in Springdale, Arkansas, and dubbed “the real deal” by his Northwest Arkansas Jazz Society instructors.

“Ryan embodies what happens when you fall in love with this genre. He’s going to be a musician, for sure,” says Robert Ginsburg, a 40-year veteran of the local airwaves who has spent a lifetime preserving jazz and cultivating its future for the next generation of Arkansas’ music lovers.

With support from the Walton Family Foundation, Robert founded the youth ensemble in 2017, recruiting a diverse group of young, talented players.

Along with scholarships to the famed Aebersold Summer Jazz Workshops for many, the ensemble pairs students with professional instructors and stages performances at some of the region’s most respected venues. As a critical pillar of a thriving community, supporting the development of a greater breadth of arts and culture opportunities in the region has long been a priority of the foundation.

“Jazz is considered one of the only truly American art forms,” explains Robert. “Its imprint on our culture is enormous, but it often goes unrecognized.”

The All-Stars was launched in part to help round out school music programs focused on classical and marching band.

Ryan won a spot on the typically high school-only All-Stars as an eighth grader.

“I’m the only musician from Har-Ber in the All-Stars. We have a jazz group, but the experience isn’t nearly as professional as the All-Stars,” he says. “When I joined the ensemble, I bonded immediately with the other players. We are kindred spirits who just love what we do.” 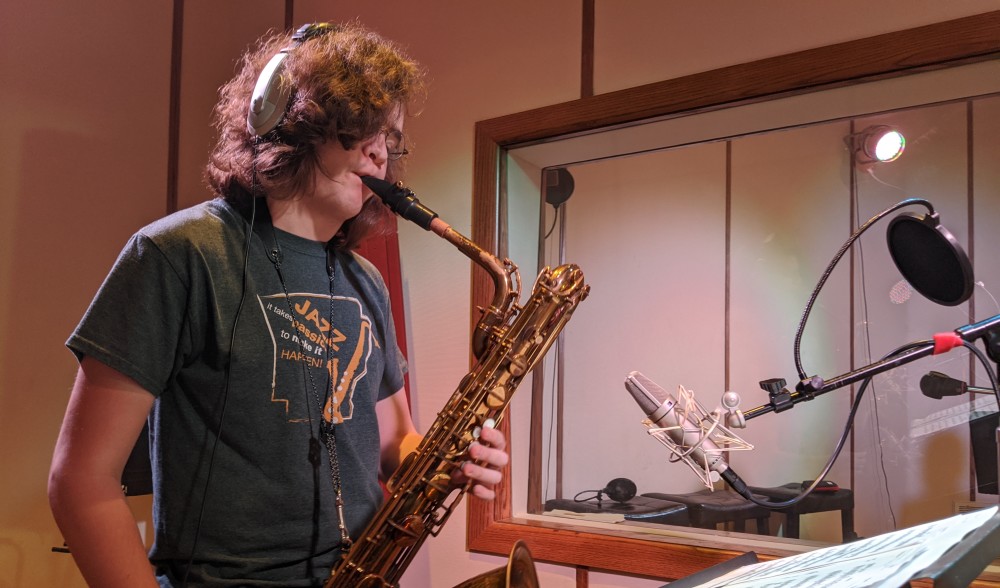 Youth Jazz Musicians Improvise Amid a Pandemic
When the coronavirus forced cancellation of group rehearsals, members of the NWA Jazz All-Stars Youth Ensemble, including saxophonist Ian Taylor, pivoted to find new and creative ways to keep the band playing.

All that changed on March 11, the date that All-Stars conductor Matt Beach says everything was placed on pause for a group of young musicians just beginning to hit their stride.

“When the pandemic hit, we thought there is just no way to put 15-18 kids in a room with half of them blowing hot air into horns,” says Matt. The region’s arts and culture venues had also been temporarily closed to keep patrons and musicians safe.

As Robert, Matt and the rest of the instructors wrestled with how to adapt, a plan to keep the music alive took shape, relying on socially-distanced studio recordings rather than an end-of-season live performance.

“At the end of every season, we record a few songs in-studio,” says Robert. “But we were initially reluctant to shift the All-Stars to a virtual format, which leaves out the energy of what can happen in a room with other musicians and an audience.”

For professional musicians, however, isolation and adaptation are frequently part of the gig as they work to learn a part, follow a metronome or record alone in the booth during expensive studio time.

So, the All-Stars took a page from the pros. Rather than scrap the season, they pivoted from live improv to the real world of recording in a matter of weeks.

“We told the kids that there was no time to rehearse together, so practice at home alone because when you show up to the studio it needs to be as close to perfect as possible,” Robert says of the adapted format.

When it was time to record, the rhythm, saxophone and brass subsections arrived together at Fayetteville’s Crisp Recordings in socially-distanced small groups, with additional time for soloists like Ryan to record alone.

What resulted was a video of two tracks, professionally layered and produced, for students to add to their repertoire–and listeners everywhere to enjoy.

“Our minds were blown at how professional they sounded right off the bat. Despite the challenges, I think this is the best year we’ve ever had,” says Robert.

For Ryan, it’s given him the skills to turn his passion into a potential career.

“Initially it was weird, playing by myself in a secluded room with only headphones. But we learned, and we ended up with a product we are really proud of.”

As Robert continues to preach the gospel of jazz, he is hopeful that the studio time will help the All-Stars carry on this American tradition.

“Jazz is certainly not the most popular music in the world,” says Robert. “But it is enduring and revered. Its future will depend on the next generation, and these kids are ready to take the wheel.”