When All the Community’s a Stage

For the Artist's Laboratory Theatre in the South Fayetteville neighborhood, a whole community is their stage. “We’ve performed in alleys, parking garages, motel rooms. The audience really seems to enjoy it,” says founder and artistic director Erika Wilhite. It’s proof, Erika believes, that art is everywhere you look.

A transplant to the city of Fayetteville and Northwest Arkansas, Erika began staging performances as a way to flex her own creative muscle and connect with local artists.

After garnering an underground following, the informal group formed a theater company, which soon drew the support of the Walton Family Foundation, among others. Its unique method, known as “immersive theater,” focuses on meaningful exchange with the community by expanding the audience’s role in live theater with original, collaborative performances and interactive experiences.

“Instead of a script, we start with a question,” Erika says of the company’s approach.

When the theater moved into its permanent space in 2016—a former church in South Fayetteville with “beautiful wood floors, a piano and a little stage”—that question was first posed at a listening party the group hosted to meet their neighbors.

“We asked the community: What should we know about our new neighborhood? What do you want from a theater company on your block?” 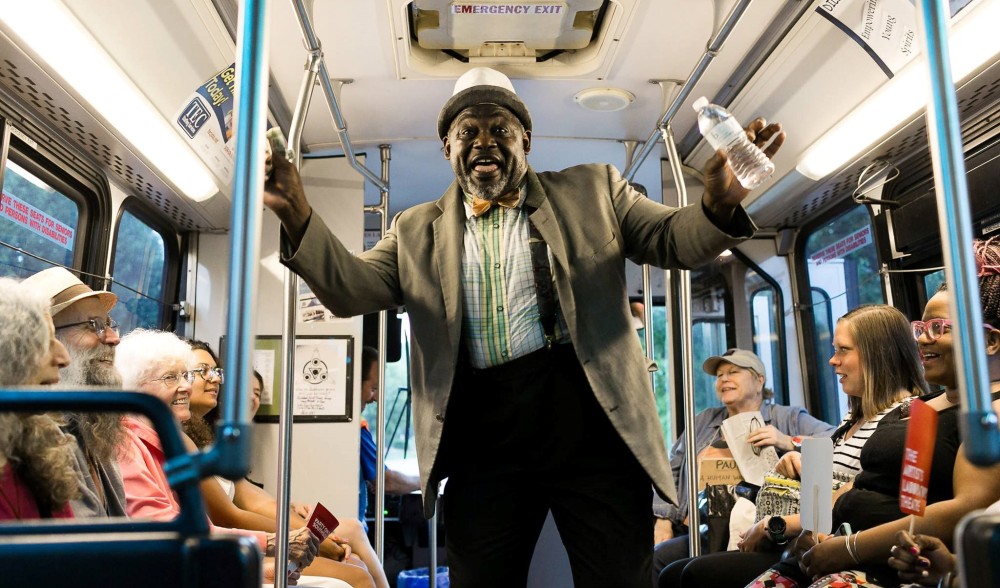 Making All the Community a Stage
In Northwest Arkansas, foundation grantee Artist's Laboratory Theatre blurs the lines between performance and public good with their form of 'immersive theater.' It expands the audience’s role in live theater with original, collaborative performances and interactive experiences. This video showcases their performance of ‘Shelter.’

The answers poured forth from this community in transition, where residents want to ensure the neighborhood remains accessible to people of all backgrounds. The challenges facing South Fayetteville are familiar in many cities across the country – from food deserts to a lack of affordable housing and reliable public transit.

These dialogues led to the creation of a new artistic project — the Southside Civic Lab — designed to directly engage with pressing community needs. The project enlists volunteer “neighborhood ambassadors” who collect real-world dialogue, video, experiences and perspectives from diverse local residents. The theater company then weaves these raw materials into performances that shine a spotlight on specific aspects of community life.

One such performance—SHELTER—focuses on the experiences of Nikki, whom the troupe first met during a listening party at “the Sally”—what locals call the Salvation Army homeless shelter. “Nikki has always been housing insecure,” says Erika. “She has lived in the woods, on people’s floors.”

Erika and the company shadowed Nikki during her stay at the shelter, where she was given 10 days to find a job or enroll in school. “She wasn’t given much in the way of support, but she did have a free bus pass. We documented her experience, and she was very generous and brave to allow us this access.”

Her experience is at the heart of SHELTER. Nikki played a critical role in making sure the story is told accurately, attending rehearsals and providing notes on her life story. In return, their muse has also gained support and friendship.

“Before I met (them), I thought I was still gonna be stuck,” Nikki says. "There was nobody naggin’ me and giving me that ‘umph.'" The Southside Civic Lab project “opened the window and a sliding glass door for freedom and opportunity.”

The Civic Lab has so far staged several performances across South Fayetteville in locations as varied as city buses and an abandoned grocery store parking lot. The titles reflect each unique issue—SHELTER, RIDE and THE HOUSE—and by incorporating dialogue, research and material from neighborhood residents themselves, the theater group illuminates local issues in a compelling and unique way. These challenges include ensuring there’s access to workforce housing in downtowns across the region and mobility issues, including the need for additional alternative transportation options and a more efficient regional mass transit system.

This collaborative community endeavor has caught the eye of local government officials.

“I don’t think that the word theater really does the group justice,” explains Devin Howland, director of economic vitality for the City of Fayetteville. “Really, they are self-described artistic interventionists, building awareness and bringing people together that might not otherwise cross paths.”

Of particular interest to the city, Devin says, is how the theater has built bridges to the local homeless population. “The theater has been so focused and so involved—building relationships and trust—which really pays dividends when we are trying to figure out how to best help this group of people.”

Ultimately, the individual community vignette performances will feed into a final, overarching production, which is being scripted with the community’s input by award-winning playwright Adrienne Dawes. It is set to be completed in the summer of 2019. Titled, The Good Person of South Fayetteville, the production will center on three deities that arrive in the neighborhood in search of a “good person” to fulfill a prophecy.

While the specifics of the play’s prophecy have yet to be written, Erika assures that it is one the community will craft together. It is a testament, she says, to the tangible role theater can play in shining a light on people’s everyday lives.

“We asked ourselves what we as artists could contribute to the neighborhood. We can create the conditions for conversations on civic engagement.”