‘I Need to Be That Person for the Next Generation’

“One night, Ted Forstmann was Oprah’s guest, talking about CSF and the opportunities it provided students. Right away, my father submitted applications for all of us.”

A native of El Sereno, California, a low-income Hispanic neighborhood north of Los Angeles, Nicole struggled emotionally as a young child following the death of her mother.

“I had a lot of difficulty learning … yet my teachers kept passing me to the next grade.”

That all changed with a fund scholarship, which enabled Nicole’s father to send her to a private school 10 minutes from her home. There, she was diagnosed with dyslexia.

As teachers decoded how Nicole learned, her grades leveled out.

“My new school helped me deal with the trauma of losing my mother and start focusing on learning. I volunteered for school activities. I ran for student council. Inspired by Emily Dickinson, I began writing poetry.”

Nicole earned CSF scholarships through high school, and when she graduated, she knew she wanted to give back.

“I’ll never forget the day my dad explained to me that two men who I had never met were helping to pay for my education,” says Nicole.

“It blew my mind. Why did they care? I wanted to reach out to CSF and thank them. But I didn’t want to reach out until I had something to show for myself.”

“We received a book of poetry in the mail at our New York office from an alum,” says Darla Romfo, founding president of the Children’s Scholarship Fund.

“I read her poems and knew I needed to reach out to this lively, interesting young woman who turned out to be Nicole.”

Back in LA, Nicole was building an impressive creative career as a poet, attending journalism school and taking acting classes. After being encouraged to turn one of her poems into a screenplay, Nicole found her life’s calling.

“I cast the actors, hired crew, found the locations and put together a short film. After we wrapped, I knew with 110% certainty that film was what I wanted to do for the rest of my life.”

As Nicole applied to film schools in New York City, Darla invited her to speak at CSF’s 20th Anniversary Gala.

“The authenticity of Nicole’s voice, her generous spirit and her drive embodies the work we try to do each day. There is no obstacle that’s going to get in her way.”

When Nicole moved cross-country for film school, she began working part-time for CSF, assisting with their social media and communications. Working with Darla and her team, Nicole is growing her film portfolio through video production.

At CSF, “I have three strong women who are all on my side, who have given me the space to grow into my role and the opportunity to add my own flair and experience to the work,” says Nicole.

She has also completed prestigious summer internships with Millennium Films and the Academy of Motion Pictures Gold Program.

In Nicole, Darla sees the change that led her to education 20 years ago after a career as a senior legislative aide in the U.S. Senate.

“I had dealt for so long with these large, intractable problems. When I came to CSF, I began to see the value in helping one person at a time. Ultimately, the solutions to our biggest issues come from individuals, and if we don’t get their education right, everything else falls apart.”

As for her own inspiration, Darla points to the leadership—mostly women—of the schools CSF partners with to provide scholarships.

“These women are providing excellent education on shoestring budgets, giving their time and sacrifice and compassion.”

As Nicole continues her career in film, she also is training to become a national advocate for equity in education as a 50CAN Fellow and hopes to open a new chapter of the Children’s Scholarship Fund in her hometown.

Reflecting on the trajectory of her education and career, Nicole is drawn back to the poetry that first helped her find her own voice.“

In one poem, Dickinson is standing at her window watching something very small in this vast world that nobody is paying attention to. She sees its beauty even when no one else can. CSF saw that beauty in me.” 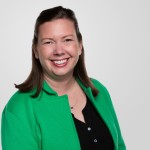