Creating a Better Future for the Salton Sea 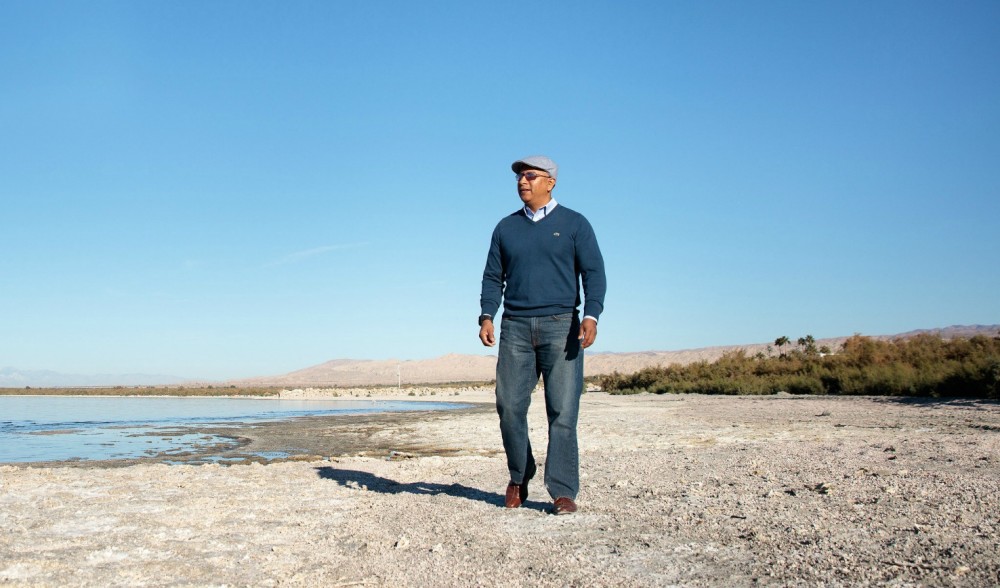 Water in the West: Frank Ruiz
As Salton Sea program director for Audubon California, Frank Ruiz is on the front lines of the fight to prevent a full-scale environmental and human health crisis on the lake.

Frank Ruiz is fighting to resolve an environmental, health crisis on the ‘California Riviera’

It’s sunrise on a lake once known as the ‘California Riviera’ – a desert oasis that half a century ago rivaled Palm Springs as the vacation destination for Golden State sunbathers, water-skiers and jet-set celebrities.

But as Frank Ruiz walks along the now-abandoned shores of the Salton Sea, the glory days of California’s largest lake seem like nothing but a fading mirage of memory.

“Our communities are living on the fringe of not only an ecological disaster, but a human health disaster,” says Frank, a veteran conservationist who has lived in the Salton Sea area for close to a decade. “The lake is receding. Salinity is spiking. Birds are dying. We don’t have a lot of time. The clock is ticking.”

As Salton Sea program director for Audubon California, Frank is on the front lines of the fight to prevent a full-scale environmental and human health crisis on the lake, which covers 350 square miles in southern California’s Imperial Valley.

The most urgent threat facing the Salton Sea and its residents is the ever-decreasing amount of water flowing into it from surrounding farmland irrigated by the Colorado River. In some ways, however, the Salton Sea is facing a crisis more than a century in the making.

The lake was formed in 1905 when floodwaters on the Colorado broke through an irrigation levee and – for two years – filled the Salton Sink, which sits below sea level. The lake created by the water was sustained for decades by runoff from the irrigated lands of the Imperial Valley. It became a magnet for real estate developers and for millions of migratory birds that needed a welcome stopover along the Pacific Flyway.

With no natural outlet, the lake’s salinity levels have risen steadily over the years, threatening not only fish and wildlife populations but also devastating the tourist economy. The Salton Sea’s problems accelerated in 2003, in part, due to a deal that sends irrigation water from the Imperial Valley to San Diego and other urban areas along coastal California.

As the lake began to shrink, salinity levels rose further. This exposed soil contaminated by decades of runoff that included agricultural chemicals; deadly toxins including arsenic and selenium now pollute the region’s air.

The social and environmental costs have been high. The region’s children and elderly suffer from the highest asthma rate in California. Housing and land prices cratered following the collapse of tourism, while unemployment spiked.

Fish populations have plummeted and so too have the numbers of birds – cormorants, pelicans and others – that once flocked to the Salton Sea.

For the past 15 years, the lake has received ‘mitigation water’ to help sustain levels. But starting this year, that water will no longer be available, and the Salton Sea’s decline will accelerate further – possibly shrinking by 50% to 60% by 2030.

Without action, the Salton Sea lakebed could become the largest source of particulate air pollution in North America, hurting the health of hundreds of thousands of people in California and northern Mexico.

But the work to secure a stable future for the Salton Sea and its residents is starting to turn this narrative around.

“The main problem is lack of water,” says Frank. “I don’t really see that there will be influx of water. But I think there are a lot of positive things we can to mitigate if we just handle it the proper way.”

The main cause for optimism is a 10-year, $380 million plan by California to address the Salton Sea crisis. The plan includes the construction of up to 30,000 acres of wetlands and bird habitat on the lake’s north and south ends, where it is fed by several small rivers. It also calls for an ambitious dust-control plan to prevent the spread of toxins and protect against rising health problems among residents.

To date, the state has provided $80 million in funding, with another $200 million facing approval in a statewide vote this June.

“How does change happen? I think the time has come for everyone to work together. We need strong collaboration from every entity that is responsible for the Salton Sea,” says Frank. “We envision a lake that is smaller and more sustainable.”

The Walton Family Foundation supports Audubon California in its work to plan and develop the proposed Salton Sea wetlands. The foundation also recently joined the S. D. Bechtel Jr. Foundation, the Rockefeller Foundation, the Water Foundation and other philanthropic organizations to set a goal of providing $10 million over five years to support projects that protect public health and the environment. The commitments are part of the foundation’s effort to secure a stable water supply throughout the Colorado River basin.

“El Rojo – The Red - as we call the Colorado River, basically brings all the life in this region, all the agriculture. It sustains not only wildlife but hundreds of thousands of people, who live and survive on the water provided by the Colorado River,” he adds. “What does the river mean to me? I would say it is life.”

For Frank, the Salton Sea crisis is not just an environmental issue, but a “moral and ethical” one because it affects thousands of residents, including his own family.

“My son deals with allergies every day. He has respiratory problems,” he says. “I am concerned for the sake of my family, for the sake of my community.”
Frank says it’s naïve to think the Salton Sea will ever be restored to its former glory – there just isn’t enough water to go around. But he believes California’s 10-year plan can help ensure a better future for the lake and its residents.

“I remain optimistic. Human beings are resilient. We are going to find a way to make it happen.”