In Wyoming’s High Desert, A Conservation Solution that Benefits Ranchers and Rivers 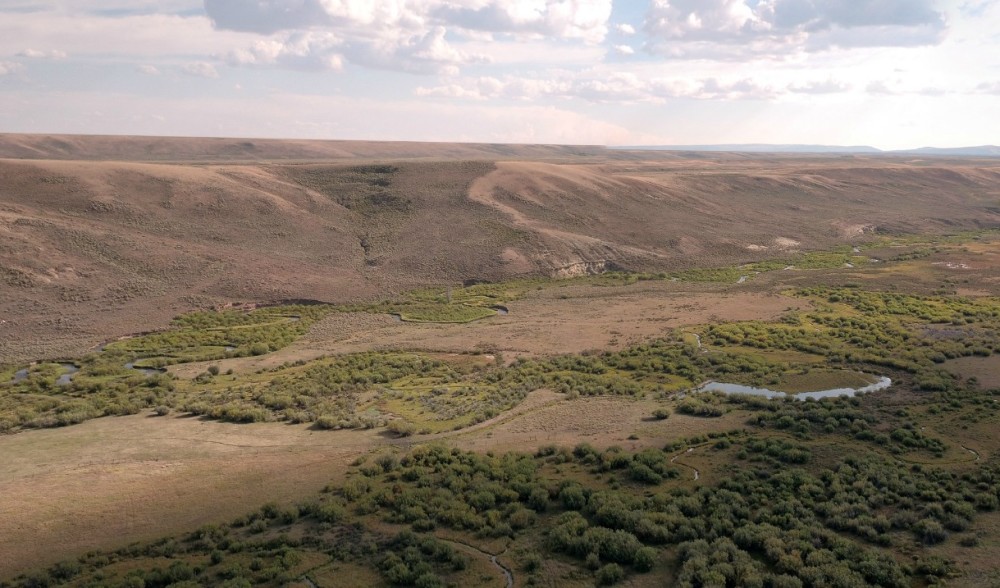 In the Shadow of Three Mountain Ranges, Freddie Botur Markets Water to a Thirsty Region

Freddie Botur strides along a ridge of the county road that runs through the heart of his sprawling ranch, a 100-square-mile expanse of sagebrush rangeland in western Wyoming.

As he walks, Freddie points to the geographic features that frame and fill the horizon.

A visitor’s eye sweeps across a landscape overwhelmed by blue sky. In the distance, the snow-tipped peaks of the surrounding Wind River, Gros Ventre and Wyoming Ranges glint like diamonds. High desert shrubs and sagebrush bump up against forested foothills of aspen and pine. In the valley below, a green ribbon of vegetation hugs the cut banks of a meandering, mountain-fed stream.

“This is the Serengeti of the American West, right here,” Freddie says.

Above 7,000 feet elevation, and with only 9 to 12 inches of precipitation a year, this arid corner of the Upper Colorado River Basin is more naturally suited to antelope and sage grouse than people and cattle.

It is water that brought Wyoming’s ranching culture to life.

Since the 1880s, when early settlers dug irrigation ditches by hand or horse-drawn plows, diversions from Cottonwood Creek and other tributaries of the Green River turned parched meadows of this valley green and fed a cattle industry that helped sustain the state’s economy.

Each spring, as the mountain snowpack melts and the creeks on his ranch rise, Freddie opens the headgates of his irrigation system to nourish the bottomland areas where his cattle graze.

“The success of the ranch and the success of the cattle that you're raising depends on having access to that water coming off the mountain,” Freddie says. “The most productive land that we have is in the water systems: in the creeks, in those bottomlands where water is able to spread and produce resilient soils and forage."

Because water is such a precious commodity here, ranchers have traditionally left their headgates open late into the fall, even when stream flows are low, to use every drop of water under their allotment.

But the water crisis that has enveloped the Colorado River basin has prompted a bold re-evaluation of the way water is used and sparked creative conservation efforts throughout the region.

The increased demand for water – and fears of shortages – across the West has created a potential market to sell management actions that conserve water in the upper basin. In places like Sublette County, Wyoming, the water’s value has primarily been for cattle and hay crops. This new marketplace for conserving water adds a value for ranchers.

“What I have realized is that there was value that we’ve never seen before in our water,” says Freddie.

“That was an eye opener, coming to an understanding that our water is worth more than just the value of the grass we are growing on it. There's value in this water to people hundreds of miles away. There are greater forces and demands that can become a problem for us in the future if something isn’t done now.”

For the past three years, Freddie has participated in the System Conservation Pilot Program, a project launched by the U.S. Bureau of Reclamation in partnership with Colorado River basin states and several municipalities. The Walton Family Foundation has also provided funding to support the program.

This market-based approach to conservation compensates ranchers and farmers to voluntarily reduce their water use, leaving the water in the stream to flow down to Lake Powell and Lake Mead, the Colorado River’s major reservoirs. The program is aimed at bringing innovation to Western water management in the face of climate change and a growing population – in a way that allows agriculture and rural communities to prosper, along with healthy rivers.

It serves almost as an insurance policy for water storage, cities and hydrogenation, Freddie says, and has the potential to reduce the risk of future water conflicts.

The water flowing through Freddie’s ranch is intricately connected to the entire Colorado River system. Melting mountain snowpack fills headwater streams like Cottonwood Creek, which drains into the Green River and then to the Colorado.

For Freddie, the conservation project made good environmental and economic sense. He shuts off his irrigation headgates after haying season, when using additional water produces diminishing returns on his pasture land.

“I'm not selling my water rights. I'm just selling an action. I'm volunteering to shut off my water and keep it in the stream rather than put it out on my meadow,” he says.

“I get the least productivity out of those meadows late in the season. I’m not going to get a second crop of hay at this altitude. So if there is another market that can give you a better value for that water, that value trumps the value of putting it back onto your meadow.”

Payments help fund maintenance on the ranch’s irrigation system and repairs to more than 200 miles of fence.

But it’s not just about the money. Like so many who work the land, Freddie has a strong conservation ethic. He has built a 15-acre riparian wetland on his ranch, constructed 30 miles of wildlife-friendly fence and secured three conservation easements that prohibit development on important habitat.

The creeks on Cottonwood Ranches are among the last great habitats for Colorado River cutthroat trout.

Freddie works closely with Trout Unlimited to protect riparian areas and ensure streams remain at levels and temperatures that sustain a healthy fishery.

The System Conservation Pilot Program has proven popular. In Wyoming, 22 ranchers applied to participate in 2017, up from five in 2016. But it needs secure funding to have a long-term impact.

Says Freddie: “Conservation has become a tool for ranchers to sustain their operations and protect their families' future in ranching.”