The bayou is in Jacques Hebert’s blood. His family settled in Plaquemines Parish, south of New Orleans, in the 1700s. Jacques grew up riding his bicycle down dirt roads in the town of Braithwaite, in neighborhoods kept dry by levees holding back the Mississippi River and storm surges from Gulf of Mexico.

“I loved being on my bike and riding around the levee. It really felt like I was in the wild,” Jacques says.

For Jacques, it was an idyllic place to be a kid. But for his family – like so many others – living in coastal Louisiana brought risk. 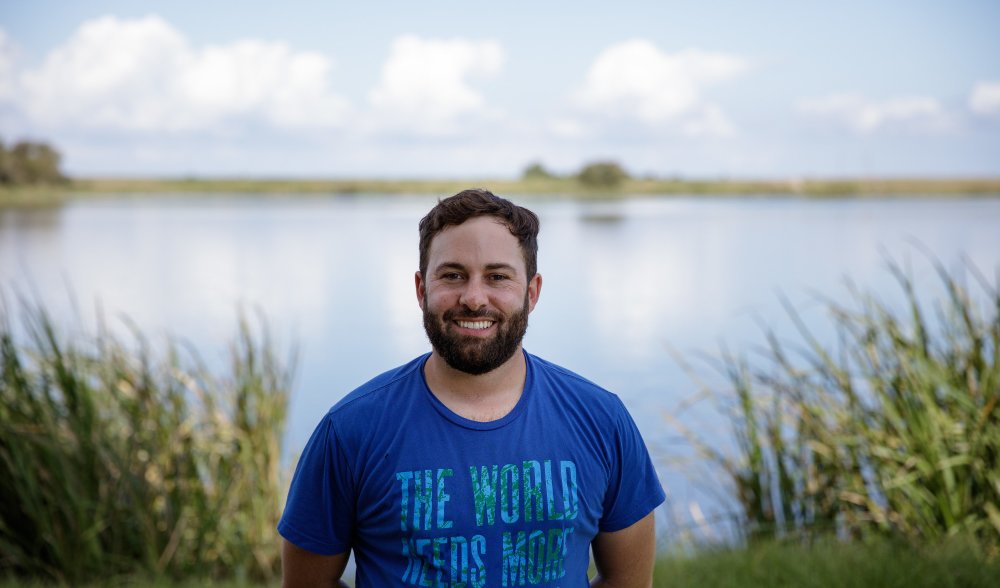 In 1965, Hurricane Betsy forced Jacques’ grandparents from their home in Pointe à la Hache, to higher ground in Braithwaite. Then Hurricane Katrina, in 2005, inundated Braithwaite and his family’s home with more than 10 feet of water. Hurricane Rita, a month later, flooded the community again.

Jacques’ family moved from Plaquemines Parish to Baton Rouge after those storms, leaving behind only the Hebert family tomb in Pointe à la Hache.

The latest assault on Jacques’ hometown came with Hurricane Isaac in 2012, when water rose to the second floor of many homes, 14 feet or more.

The damage caused by Isaac – a relatively minor Category 1 hurricane - illustrated the crisis coastal Louisiana faces from rising sea levels and the rapid loss of wetlands that had been a buffer against storms.

It also demonstrated to Jacques the urgent need to address this environmental threat, inspiring him to return home from California and put his energy toward restoring Louisiana’s coast. Now living in New Orleans, he works with Audubon Louisiana and the Restore the Mississippi River Delta coalition to rebuild wetlands through large-scale restoration projects.

We asked Jacques to share his thoughts about the economic, cultural and environmental importance of coastal Louisiana and how the state’s Coastal Master Plan can protect it from future devastation.

On the scope of the threat facing New Orleans and Louisiana:

“Since the 1930s we've lost coastal land equivalent to the size of the entire state of Delaware. We’re losing a football field of land every 100 minutes. This isn't land that's far off in the distance. This is land that is right next to New Orleans. Our wetlands are our first line of defense in many ways. Our levees are one of the last lines of defense.”

On why wetlands loss is more than just a Louisiana problem:

“I like to say that the Gulf of Mexico is America's coast. It's critically important in terms of what it produces for the United States in terms of energy, in terms of shipping, in terms of fisheries. This isn't a local crisis. This is a national crisis. We need everyone to be involved in helping to address it.”

On harnessing the Mississippi River to restore wetlands:

“The river is our most powerful tool in the fight against land loss and sea level rise. The greatest problem is that we have this precious resource – sediment from the Mississippi River – that is slipping past us every day. Since the levees were built along the Mississippi, all the sediment coming down the river is being trapped and pushed into the Gulf. Traditionally, the river would flood its banks and deposit sediment in wetlands across the delta. Because that can't happen, our delta and our wetlands are disappearing. Our focus is on large-scale sediment diversions to capture sediment and build the land back up. Unless we have that storm surge buffer restored, it's going to be really hard to live in places like New Orleans.”

On how Louisiana is showing leadership with its Coastal Master Plan:

“Over the last decade, the state of Louisiana has been proactive and aggressive in implementing a suite of restoration projects. Everything from restoring barrier islands, to creating marsh where it's needed, as well as advancing large-scale projects like sediment diversions. In a lot of ways, Louisiana is leading on this issue and is a model for places around the world dealing with a changing environment. It's easy sometimes for people to just think, ‘Well, it's hopeless.’ But there is a lot of hope.”

On what he loves about New Orleans and coastal Louisiana:

“New Orleans is like no place else in the world. It's magical, ever changing, mystical, a beautiful confluence of food and people and music and nature. You're living in a place surrounded by water and influenced by water and the Mississippi River. As a kid, I just loved riding my bike along the Mississippi River levee and seeing the ships go by the river and feeling the breeze from the river. This is a place built on the traditions and cultures of people interacting with that natural environment.”