Don Wyse and the Forever Green team are developing the “next generation” of sustainable cash crops.

Don Wyse believes the future of Midwestern farming is growing on a test plot at the University of Minnesota.

In the rich soils of the university’s agriculture experiment station, Don tends to neatly cultivated rows of camelina, pennycress and Kernza – plants that hold the potential to be the “next generation” of cash crops in an agricultural landscape long dominated by corns and soybeans.

“These are crops that produce new economic opportunity as well as environmental protection,” says Don, who leads a team of scientists working on the Forever Green Initiative, a joint University of Minnesota and U.S. Department of Agriculture program to develop more efficient cropping systems.

“What's exciting is that we are getting to the point where we have a range of crops under development that are going through early-stage commercialization and becoming ready for market.” 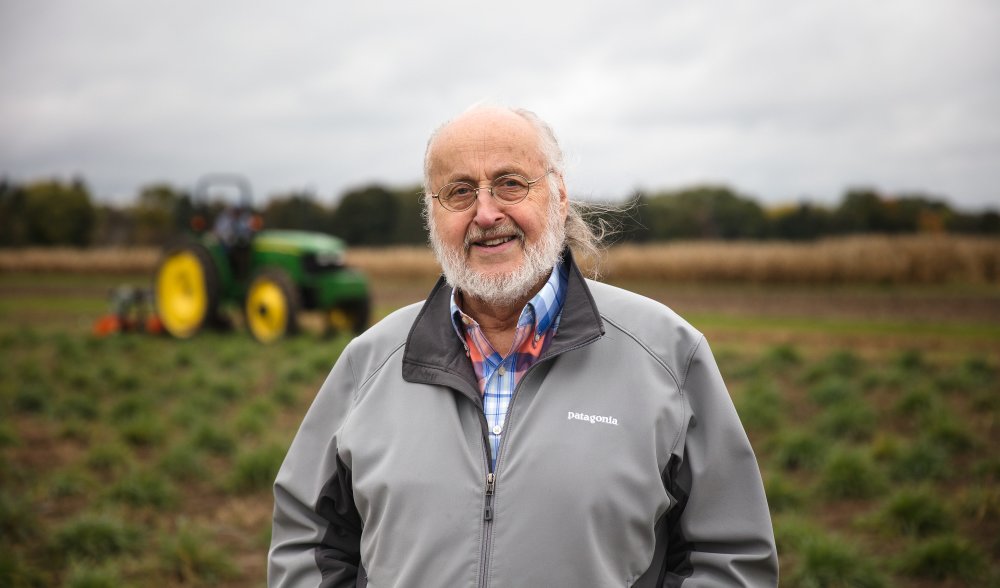 Roots of Conservation: Don Wyse
At the University of Minnesota, Don Wyse is developing crops that provide new economic opportunities for farmers and improve water quality in the Mississippi River basin.

As a professor of agronomy and plant genetics, Don has spent more than 40 years working to develop crops that provide new economic opportunities for farmers.

At the same time, he is seeking solutions to one of the biggest threats facing Midwestern agriculture – nutrient pollution that is impacting the health of the Mississippi River system and the Gulf of Mexico.

It’s a problem caused by a modern farming system that incentivizes mass production of corn and soybeans, fertilizer-intensive summer crops that grow and take up nitrogen for just three months of the year, leaving the land vulnerable to erosion and nutrient loss.

The absence of a “living cover” on the land for the remaining months allows massive amounts of nutrients – primarily nitrogen and phosphorous – to be washed off farmland and into streams and rivers that drain into the Gulf.

“The upper Midwest is exporting a tremendous amount of phosphorous and nitrogen to the Gulf of Mexico,” says Don. “We’re not going to be able to significantly reduce that unless we incorporate winter annuals and perennial crops as part of cropping systems throughout the Midwest.”

Cover crops hold the potential to provide broad conservation benefits for the Mississippi River basin. They keep roots in the ground for more months of the year - holding water in fields, reducing soil erosion, absorbing nitrogen and limiting nutrient loss through runoff.

“Farmers get challenged: Why don’t you find something else to grow? But it’s not the farmers that are the problem. It’s the system’s problem. Farmers can't grow new crops or any crop that does not have a market,” he says.

“To make nutrient reduction happen, there has to be more economic opportunity for farmers. There has to be some level of return.”

That’s where Don and his team at the Forever Green Initiative come in.

With support from the Walton Family Foundation, they’re developing new genetic lines of annual plants like camelina and pennycress – which both hold potential as oilseed crops – that can be used in food and industrial products.

New varieties of another plant, Kernza, a perennial wheatgrass, are already being used as an ingredient in some beer, pasta and breakfast cereals.

Advances in genomics over the past decade have made it easier and less expensive to map a plant’s DNA. That allows scientists to use this information to support classical plant breeding approaches (non-GMO) that develop plants with high quality grain, higher yields and are easier to grow and harvest.

The potential economic benefit from camelina and pennycress, Don says, is that they add another revenue stream for a farmer on the same land in which they are also growing corn and soybeans.

Camelina and pennycress are fall annuals. They could be sowed in the autumn, absorb nutrients through winter and spring, and be harvested before, or just after, corn and soybeans are planted.

The environmental benefit is that pennycress and camelina, when grown in combination with corn and soybeans, can reduce nitrate loss by 95% and soil erosion by 80%.

“These continuous living covers will hold the nitrogen in place. They have the potential to dramatically improve water quality,” Don says.

The Forever Green Initiative is working with companies such as PepsiCo and General Mills on ways to commercialize these new, more sustainable crops in their products.

“That’s what’s unique in what we’re doing,” Don says. “Not only do we do the genomics, the plant breeding and the agronomics, but we’re also doing the end-use development. If there’s no end use, it doesn’t matter how good the crop is.”

Don says these new crops could be viable on “millions of acres” in the Midwest and be part of the long-term environmental solution to water quality problems throughout the Mississippi River basin.

“They can help preserve farming culture by making agriculture more economically sustainable. I think about that a lot,” Don says. “I’d love these new crops to become an enterprise that adds new economic opportunity to our rural communities.”

This would allow the next generation of farmers to become part of our vibrant rural communities for decades to come.