Reclaiming Riverbanks from the Clutch of Invasive Species

Environment
Sheldon Alberts
In southern Colorado, Emily Kasyon is helping put a threatened waterway on a course to recovery.

Emily Kasyon believes in the healing power of rivers.

“I enjoy the richness that a river brings to a landscape,” she says. “For me, rivers bring a sense of calm. It is comforting for me to have running water nearby, someplace I can go to wash off the dirt from the day and replenish.”

Replenish. Rejuvenate. Restore. What rivers do for Emily, she does for rivers in return.

As watershed program coordinator for the Southwest Conservation Corps, Emily is a foot soldier in the battle to reclaim riparian habitat lost to invasive species throughout the Colorado River basin. 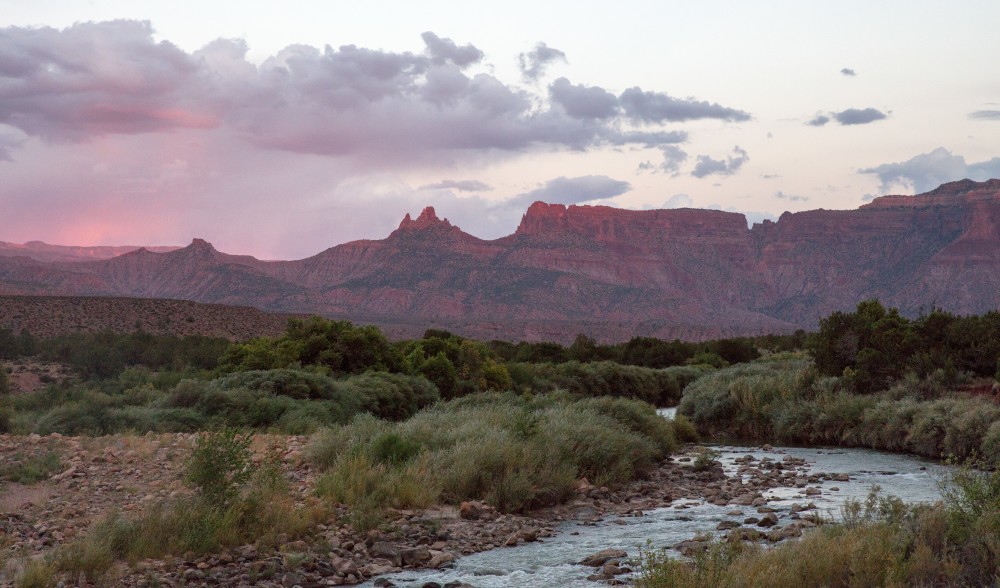 Riverside Stories: Emily Kasyon
"I come to work every day because I feel like I am really making a positive impact," says Emily Kasyon. As watershed program coordinator for the Southwest Conservation Corps, Emily is helping protect the Dolores River from invasive species, such as tamarisk, that are crowding out native plants and damaging riparian habitat throughout the Colorado River basin.

Her work on the Dolores River, a tributary of the Colorado, is helping put the 241-mile-long waterway on a healthier trajectory – one that benefits both wildlife and creates more economic opportunity for communities along its course.

In her job, Emily provides field support and training for conservation crews tasked with removing invasive plants like tamarisk, which suffocate rivers by crowding out native vegetation along their banks and preventing river processes that create and refresh instream habitat.

These crews spend long, grueling days using chainsaws to cut down the tamarisk and herbicides to prevent and slow regrowth.

Emily also runs the vegetation monitoring program for the Dolores River Restoration Partnership, tracking and evaluating the success of a years-long restoration effort.

“This job has given me an opportunity to grow and learn and discover something I’m passionate about,” says Emily. “I started out on a saw crew and didn’t really know that I was going to fall in love with this work.”

Originally imported to the West to help strengthen riverbanks, tamarisk has had an insidious impact by creating monocultures that reduce diversity of plant and animal life.

“Sitting underneath an old-growth cottonwood grove along a river is one of the most relaxing experiences I can think of,” Emily says.

Over the past decade, conservation crews have treated and removed tamarisk from more than 100 miles along the Dolores, which merges with the Colorado River in eastern Utah.

The Walton Family Foundation has supported riparian restoration and monitoring along the Dolores River, through groups like Conservation Legacy and RiversEdge West and programs such as the Southwest Conservation Corps.

"In the first few years, the Dolores River Restoration Partnership focused solely on removing tamarisk from the banks and floodplains of the river," says David Varner, restoration coordinator for RiversEdge West.

"Once that initial and significant lift was accomplished, partners adjusted methods toward maintaining weed-free areas and adding native species to build resiliency into the disturbed ecosystem."

This work has created an opportunity to connect communities to their rivers and to understand the benefits of healthy rivers.

“I love providing opportunities for young people to actually work in conservation. I come to work every day because I feel like I am really making a positive impact, from teaching new skills to crew members to helping the river recover from the impact of invasive species,” Emily says.

“I’ve been able to see the impact that partnership work has had on the river. Years of hard work, even though progress is slow, truly makes a difference.”

Emily describes the Colorado Plateau as her “favorite place on earth.” She is an avid hiker and canyoneer.

“The canyons of this landscape were created by water and rivers. There would be no slot canyons, or exposed rock to climb, or breathtaking vistas overlooking river bottoms, without water,” she says.

“The rivers running through the West are the lifeblood of the region and I feel good about working to make these systems healthy for people, communities and wildlife.”