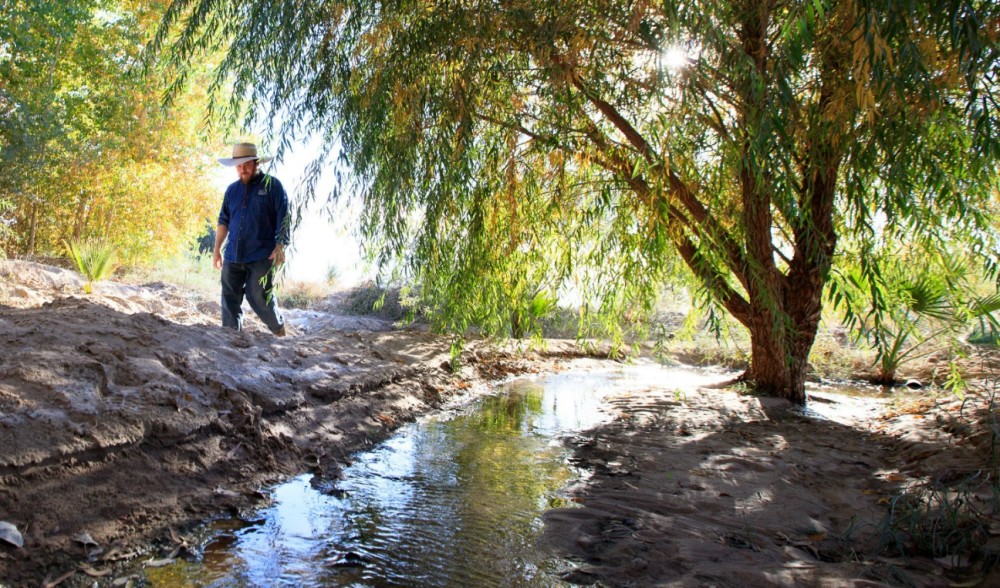 Water in the West: Osvel Hinojosa
As director of the water and wetlands program at Pronatura Noroeste, Osvel Hinojosa has helped lead cross-border efforts to fund the Delta’s restoration and ensure water from the Colorado is allotted specifically for environmental use.

For almost all of its history, the Colorado River had its way with the Western landscape, carving epic canyons through billion-year-old rock and creating a vast, jungled Delta with a continent’s worth of sediment.

The river has been tamed over the past century, its waters dammed and diverted for thousands of different human uses. Most years, the Colorado runs dry long before it reaches its natural destination in the Sea of Cortez.

But don’t tell Osvel Hinojosa that the river is dying.

“For me, the Colorado River, it's a symbol of hope,” he says. “It is the lifeline of the western North America. It is a very resilient ecosystem.”

Osvel has witnessed the river’s survival instincts over two decades working to restore the Colorado River Delta, the 100-mile section of the river in northwestern Mexico, below the Morelos Dam on the Arizona border.

As director of the water and wetlands program at Pronatura Noroeste, a Mexican conservation group, Osvel has helped lead cross-border efforts to fund the Delta’s restoration and ensure water from the Colorado is allotted specifically for environmental use.

Pronatura Noroeste and its partners in the binational Raise the River coalition scored a significant victory in 2017 when the United States and Mexico reached an agreement to increase water security for Colorado River users in both countries. The deal, known as Minute 323, will provide at least 210,000 acre-feet of water over nine years for ongoing riparian restoration in the Delta, supporting local economies and improving habitat for vegetation and wildlife that can thrive with even small increases in water supply.

Philanthropic organizations, including the Walton Family Foundation, and NGOs will share, with the U.S. and Mexican federal governments, the cost of the Delta restoration work and the water needed for restoration.

“To solve the problems of the Colorado River, it really takes collaboration,” Osvel says. “In many ways, the Colorado River has been an example of how we can overdevelop a basin, or a landscape, but I think now it's an example of how, through collaboration and planning and science and partnerships, we can turn things around and make things better.”

For decades, optimism like Osvel’s was in as short supply in the Colorado River Delta as water.

Of all the ecosystems impacted by the harnessing of the Colorado in the 20th century, the Delta suffered most. Riparian forests of cottonwoods, willows and mesquite, as well as marsh and estuarine wetlands, once thrived across about 2 million acres, but now cover just a fraction of that area.

The construction of the Hoover Dam in the 1930s, and then the Glen Canyon Dam from 1956 to 1966, sapped the Delta of its freshwater and sparked its decline. A 1944 binational treaty negotiated between the United States and Mexico guaranteed Mexico 1.5 million acre feet of water every year from the Colorado River, except in times of extraordinary drought or times of surplus deliveries. But all of it was diverted from the river at the Mexican border and allocated for agricultural and industrial use.

People who survived on the natural bounty of the Delta, like the Cocapah tribe, were devastated. So was wildlife. Water birds were once so abundant they “accumulated in small clouds … like a premature snowstorm,” naturalist Aldo Leopold wrote following a 1922 canoe trip in the Delta. But those bird populations declined when the water stopped flowing.

“There was no water for nature,” Osvel says. “The Colorado River is over allocated that basically it had no more water for the environment and stopped at Morelos Dam [on the Arizona-Mexico border].”

News headlines have made proclamations declaring the Colorado River “long-dead” and a “salt-encrusted wasteland.” As recently as 2012, the New York Times declared that the Mexican portion of the Colorado generated only a “feeble” pulse.

But Osvel and other river allies learned that the wetlands and forests of the Colorado River Delta were not dead, merely dormant. During wet years in the 1980s and 1990s, sporadic releases of water from the Morelos Dam sparked germination of trees and regeneration of native vegetation in riparian areas that were flooded on those occasions.

“It was pretty cool, because we discovered that this was not a dead ecosystem and that there were huge opportunities for restoration here,” Osvel says.

In 2012, conservation groups scored another victory when a U.S.-Mexico water agreement – known as Minute 319 – included plans for a major release of river water into the Delta. The resulting 2014 ‘pulse flow’ lasted for six weeks and sent 105,000-acre-feet of water down the river and its Delta.

The event brought life to both river communities and the environment.

“For six weeks when there was water in the river, people were coming every afternoon just to enjoy the river,” Osvel says. “They volunteered for restoration projects and to clean trash on the riverbed. It just seemed like people needed to reconnect to nature.”

In addition to the success of the pulse flow, Pronatura Noroeste and partners in Raise the River have cleared and planted more than 1,000 acres of riparian habitat – using water purchased from voluntary sellers – on the main channel of the Colorado River. They have planted more than 230,000 native cottonwoods and willows, grown in local nurseries, and generated seasonal and permanent local restoration jobs. Monitoring has shown a resulting increase of resident and migratory birds in restored areas.

“I think that the Delta region has shown us how we can balance a relationship with nature,” Osvel says. "While we are recovering the river for nature and wildlife, it is really important that we are reconnecting people with the river. What we have seen in the Delta is that we can try to get to a new relationship between people and nature, in which the environment is part of the equation.”

To be sure, many challenges remain. The Colorado River still faces a “structural deficit” of water and changing weather pattern are likely to continue threatening supply.

“We can’t control the amount of water Mother Nature delivers to the Colorado River,” Osvel says. “But the recent U.S.-Mexico water agreement gives us new tools – and better odds – to withstand drier times in the future. It proves that water can be a uniting force.”

The vision for the Colorado River Delta, Osvel says, is to create a network of functional riparian sites and more stretches of river with flowing water.

“We know that we cannot go back to restore the Delta to what it was. But it is very likely we can have long stretches of river and significant wetlands and riparian forests,” he says. “I’m very optimistic for the future of the Colorado River, because so many people are coming together to work on saving it.”