When Ryan Quintana graduated from New Mexico State University, he had no intention of teaching in Arkansas. He had just completed his master's degree in curriculum and instruction and planned to stay close to family and friends.

That is, until he attended a job fair at the university and met a representative from Rogers Public Schools who was working to increase the number of Hispanic educators in the Northwest Arkansas district.

Rogers schools serve a student body that is 45% Hispanic and 31% English-language learners. Yet, at the time of the grant in 2011, only 1% of the educators were Hispanic.

Decades of research on teachers shows that gap matters, and on average, students perform better when they have teachers of similar backgrounds.

Roger Hill, assistant superintendent for human resources, agrees that it's significant for students to see themselves in their educators. He says, "At Rogers, we are building hopes and dreams. It's important to be representative of all races and ethnicities in our schools. Our students need to see professionals who look like them."

Ryan - conversational in Spanish and of a Hispanic background - was invited to visit the district and region. To his surprise, he fell in love.

"Northwest Arkansas is absolutely beautiful," says Ryan, who is now in his seventh year as a teacher in the Rogers school district and is pursuing his degree to become a principal. "It's a wonderful place to raise kids, and there's so much to do."

Ryan was also motivated by the district's commitment to increasing diversity.

"When teachers build strong relationships with their students, those students tend to excel."

To help in his relocation, Ryan was offered a $2,000 reimbursement. On his fifth anniversary with Rogers, he was awarded a $5,000 retention bonus, both through grant funding.

"I honestly totally forgot about the bonus after my first year of teaching," says Ryan. "I ended up falling in love with my job, the kids, and the people I work with and suddenly, five years had passed."

Though Ryan forgot about the retention bonus, he admits that it originally grabbed his attention, as did the relocation reimbursement.

"I believe the grant money will continue to help get the attention of Hispanic teachers. Then, once they're here, they won't want to leave," he says.

The school district's goal is to hire a minimum of five Hispanic educators per year. They have hired 30 in the past four years alone.

Ryan says he plans to stay with the district until he retires and feels he's made a particular impact on his Hispanic students.

He recalls a student who spoke exclusively Spanish at home. The student was struggling in reading and writing. Ryan explains, "The daily transition from Spanish to English was interfering with his ability to read and write. Because I could translate certain words and relate them to cultural experiences, it helped him with comprehension. He was able to make huge improvements over the course of a year." 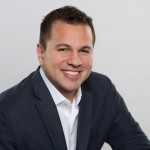