In Post-Katrina New Orleans, Black Educators Are Shaping Their Narrative

K-12 Education
Melinda Wright
As the Crescent City charts its educational course 15 years after Hurricane Katrina, one group is striving to ensure that support for Black educators takes center stage.

Adrinda Kelly understands the importance of excellent Black role models. The New Orleans native and Harvard graduate has studied these connections for years and lived them day-by-day as a young girl.

“Motivating Black children to persist, that’s part of my story. My principal, my doctors, my teachers, our elected officials—I didn’t need to be told that Black excellence was possible because it was modeled for me every day.”

As founding executive director of Black Education for New Orleans, Adrinda and BE NOLA are providing resources and professional development opportunities to Black-governed and Black-led public charter schools across the city.

The organization also serves as a convener for Black education stakeholders and single-site charters as they fight for a more inclusive narrative to guide future decision-making.

Adrinda, who calls herself a “proud New Orleans public school graduate,” attended McDonogh 35 Senior High School. Founded in 1917, it was for several decades the only public four-year high school for African Americans in the city. “When you think about Black excellence in New Orleans, this institution comes front and center.”

The ability to shape our own narrative has a direct connection with our ability to survive and thrive.

It was here that Adrinda, taught by Black educators amongst her peers, learned lessons left out of the history books—silenced stories of the resistance, resilience and self-determination of Black people across her city and the south.

“The ability to shape our own narrative,” Adrinda says of events ranging from slave revolts to Hurricane Katrina, “has a direct connection with our ability to survive and thrive.”

In the decade following Katrina’s devastation, a complex question came into focus: As families returned to rebuild their lives, what would their educational options look like?

BE NOLA was formed, says Adrinda, out of a strong desire to see more Black leaders and Black educators be directly involved in answering that question.

“No matter where folks were ideologically, whether they were enthusiastic or skeptical of the changes underway in education, every Black leader was saying that the way these changes were happening were marginalizing Black leaders and educators, to the detriment of the educational progress being sought," Adrinda says.

When Katrina hit, it “sent her spinning,” Adrinda says of her life as an Ivy League graduate working for a New York City education publisher. She returned to school and worked for several years in youth empowerment and at Teach for America before returning to her hometown in 2018 as the founding executive director of BE NOLA.

In its first two years, and with support from the Walton Family Foundation, BE NOLA has supported five schools and partnered with 15 Black-led community groups in the city to date.

“Post-Katrina,” says Adrinda, “while there were a lot of resources flowing in, many leaders of Black-led and Black-governed schools struggled to access those supports.“ BE NOLA, she explains, focuses on supporting and strengthening the “Mom and Pop” neighborhood schools that existed before the storm and deserve a place in the city’s educational future.

Moton Charter School in New Orleans East is one such school. It serves a neighborhood with lots of school-age students but too few quality educational options, run by what Adrinda calls “one of the strongest school leaders in our city.”

As the school ‘s dedicated team of leaders and staff dug in to address academic challenges, Adrinda’s team worked to provide instructional assistance and capacity-building, contributing to one of the most significant achievement gains in the city.

For too many years, we have missed the boat on ensuring that the Black community being served is involved in the educational decisions being made.

BE NOLA also is working with the Institute of Women and Ethnic Studies to elevate a conversation about wellness supports for schools and educators in a community that struggles with trauma — from structural racism, income inequality and chronic stress, to the untethered feeling many experienced when their neighborhoods were flooded.

“As Black teachers socially and emotionally support kids, they are having their traumas retriggered,” says Adrinda. “How do we best sustain and support them as we work to build a deep and lasting bench of Black educators in the city?”

Adrinda is proud of the progress so far and hopeful for the future.

“For too many years, we have largely missed the boat on ensuring that the Black community being served is involved in the educational decisions being made. But we are starting to see more folks committed to shifting that reality.” 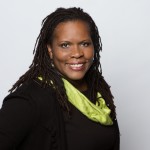