Farming for a Future of Healthy Soil, Clean Water 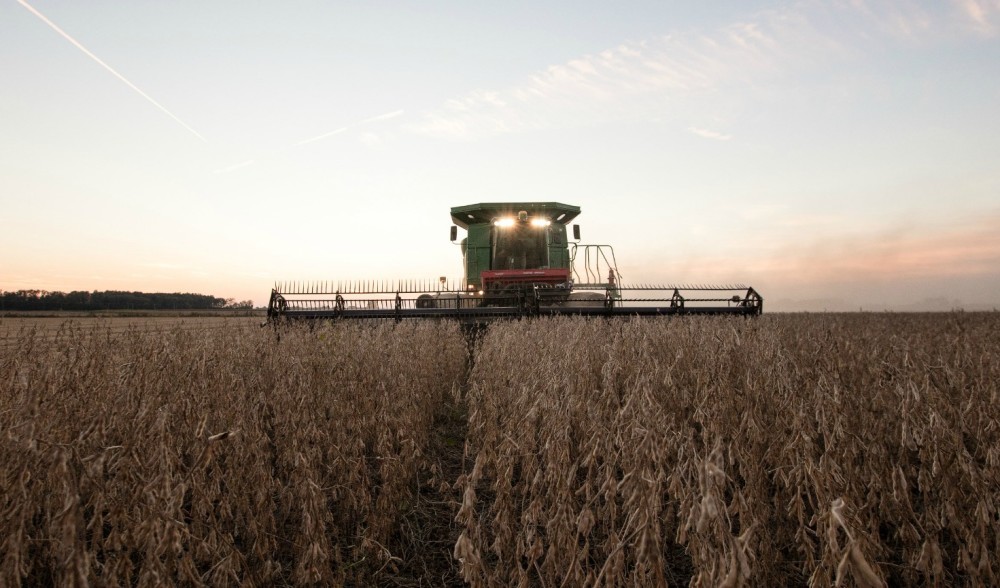 Roots of Conservation: Ray McCormick
For more than 40 years, Ray has led efforts to implement and popularize a more sustainable model of agriculture – one that brings economic benefit while reducing the environmental impact of intensive row cropping.

On a crisp and clear October evening in southwestern Indiana, Ray McCormick runs his combine across a field of ripe soybeans, sending up a cloud of fine dust that lingers in the cool autumn air.

As he harvests the soybeans, Ray is simultaneously planting another crop into the rich Midwestern soil. Using an applicator installed on the combine’s header, the fourth generation farmer is seeding annual ryegrass that will take root before winter and provide living cover on the land.

It’s a conservation practice Ray uses on “every acre” to improve soil health, prevent erosion and reduce nutrient runoff from his farm into the Wabash River, a 500-mile-long tributary of the Mississippi River.

“Even though this ground is pretty flat, the nutrients will get away from us during heavy rains. That’s why we put cover crops on every acre,” he says.

For more than 40 years, Ray has led efforts to implement and popularize a more sustainable model of agriculture – one that brings economic benefit while reducing the environmental impact of intensive row cropping.

Cover crops are at the heart of a strategy that, for Ray, also includes restoring wetlands and planting bottomland hardwood trees on frequently flooded land.

“As a farmer, I feel particularly responsible for the impact I have on nature. We’ve got a profound responsibility to take care of the land.”

Ray’s work has direct economic benefits for his own farm – but it also helps address a larger threat to the Mississippi River and the heartland.

For decades, the Mississippi River and its tributaries have been plagued by nutrient runoff, specifically excess nitrogen and phosphorous. These nutrients are essential to growing soybeans and corn but often unintentionally pollute rivers and streams.

The Walton Family Foundation has been working since 2009 to advance common sense, farmer-friendly solutions to water quality problems through the watershed.

Ray considers himself at “ground zero” of the fight. Several hundred acres of his farm run along the Wabash, which is considered an impaired river under the Clean Water Act. The river has lost nearly two dozen fish and mussel species. Deforestation along river bottoms has increased soil erosion and flooding. A University of Notre Dame study found the Wabash contributes 11% of the excess nitrogen that flows into the Gulf of Mexico.

“There are 31 states draining into the Mississippi and we have too many nutrients escaping from our farmland. Those lost nutrients are lost money for farmers. We’re paying for that nitrogen and phosphorous – no farmer wants to lose that into the Gulf. The future of farming lies in building resiliency in the soil.”

There are no quick fixes, Ray acknowledges. He’s been no-till farming and using cover crops on his 2,400-acre farm since the 1980s.

“Farming is a long-range investment,” he says. “I don't look just at how much money I am going to make this year, but how sustainability on the farm works economically over the long term.”

In the 1990s, Ray began removing some low-lying farmland from production. He has enrolled in federal wetlands conservation programs to reforest river bottoms with oak trees and other native vegetation. Today, the oldest replanted oaks tower 30 to 40 feet high.

“By planting trees, you add wildlife habitat and hold nutrients in these river bottoms. These big oak forests pull nitrogen right out of the ground water.”

As much as Ray has improved environmental conditions on his farm, he knows change must occur on a much bigger scale. He works closely in Indiana with The Nature Conservancy, a Walton Family Foundation partner, to encourage farmers to embrace new conservation practices, including cover crops and bottomland reforestation.

“If you really want to have an impact, you have to get involved with partnerships,” he says.

“You start with farmers. You have go out on the landscape and make an impact on those millions of acres that are in cropland. It's not just about what I do on my farm but it's about what all farmers do up and down through the watershed of the Mississippi River.”

When he’s out harvesting alone on his combine, Ray thinks as much about the future as the present. He thinks about his son, the fifth generation McCormick to farm the land.

“I also think about all the other people that will be here in the future. What's kept me in farming is that I'm able to go out on the land and feel how important it is to restore, maintain, and protect these areas,” he says.

Roots of Conservation is a series of stories about the people working to address threats to water quality and soil health in the Mississippi River Basin and find conservation solutions that make economic sense for people and communities.
Learn More
Comments
Log in to post a comment...
Recent Stories