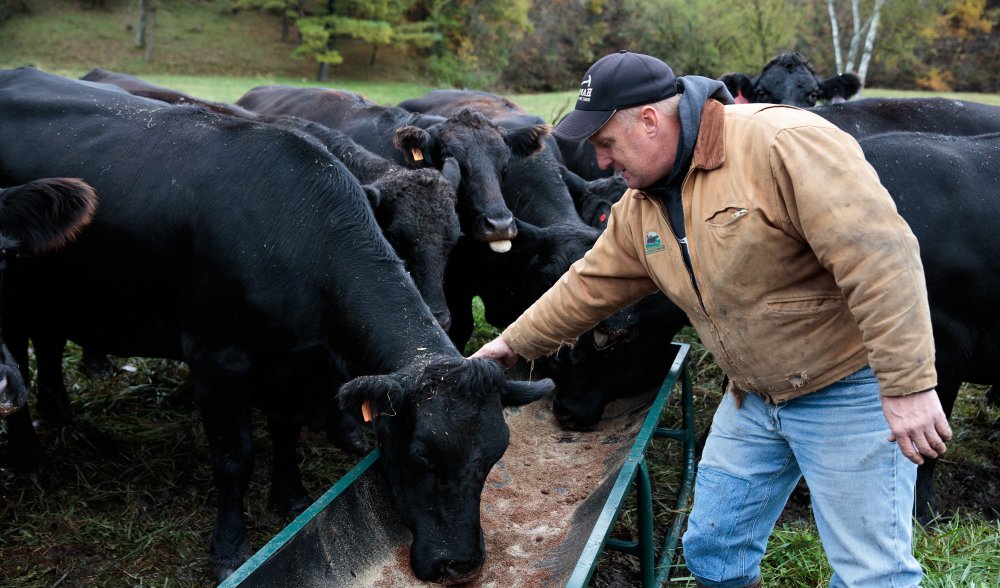 Those four words hold the key to success and sustainability for Rod Ofte.

“We simply let nature heal itself,” he says.

A fifth-generation farmer and rancher, Rod raises 30 cow calf pairs and finishes about 50 head of cattle on his family’s 300-acre property in Wisconsin’s rugged Driftless region.

The ranch is a picturesque piece of the rural Midwest that has been in the Ofte family since the mid 19th century. Coon Creek, a coldwater stream teeming with trout, runs through the ranch. The creek is fed by 15 natural springs that flow out of the surrounding lime stone hills.

As a small rancher confronting the often-narrow margins of modern agriculture, Rod says his chief concerns are keeping his operation financially sound and protecting its most precious assets: Soil and water.

The best way Rod has found to do that is by rotational grazing.

Rather than letting livestock feed across their entire pasture all at once, Rod rotates his herd through 18 smaller paddocks, moving them every two to five days to new feeding areas on his ranch’s 150 acres of pasture and hay ground.

The practice gives his cattle constant access to fresh, nutrient-rich grass while preventing overgrazing that causes lasting damage to plants and soil. After the cattle finish feeding on one part of the property, the grass is left to regrow for at least 30 days.

“We've been farming the valley since 1848. Our roots run deep here, so it's very important to me that we leave the farm in better condition than when we found it,” Rod says, “and restoration grazing is really the silver bullet to ensure that happens.”

Rod says the economic and environmental benefits for his ranch have been profound.

Because the grass in his pasture gets rest from the cattle, it grows more robust roots. The stronger roots in turn absorb more water, produce more forage, and hold the soil in place, keeping it on the ranch instead losing it to rivers and streams.

“When we get a heavy rain, it gets soaked up because there's probably four to six feet of roots underneath these plants. They just suck up the water,” he says.

When the grass is healthier, it grows faster and is able to fend off invasive species, meaning there is less need for herbicide to kill weeds. Rod says his forage production has increased 40% since fully adopting rotational grazing principles.

“Selfishly, I got into rotational grazing because I heard you get increased production from the same amount of land simply by letting it rest,” Rod says.

“We now carry 15 more cow calf pairs than we could initially. That’s generating more revenue, but it’s also better for the soil. Our pastures are extremely vibrant and healthy.”

This has helped the water in Coon Creek remain clear and cold, sustaining a recreational trout fishery that attracts fly-fishing clients to Rod’s ranch, providing him another source of revenue.

“A lot of people see cattle wading in streams and think it’s bad. Our message is that cattle are not aquatic species, and if you provide them enough feed, they go and drink and they get out,” Rod says. “Both trout streams and cattle can thrive together.”

Rod’s cattle are 100% grass fed, which can draw a 20% premium at market because of growing demand for free range, grass finished beef.

“Our animals are never confined. They have access to fresh water and feed 24/7, 365 days a year. By getting that premium, it makes our farming program more sustainable, which helps us stay on the land.”

Having experienced the benefits of rotational grazing on his own ranch, Rod has become an advocate of the practice as a way to bring broader benefit to farmers, ranchers and the environment in the Midwest.

He works part time with the Pasture Project, an effort launched to increase the amount of sustainably managed farmland, through practices such as rotational grazing, the introduction of cover crops and livestock feeding in fields planted to row crops.

The project is run by the nonprofit Wallace Center at Winrock International. The Walton Family Foundation provides funding as part of its efforts to improve water quality throughout the Mississippi River basin and in the Gulf of Mexico, which are suffering from excessive agricultural nutrient runoff. That runoff promotes rapid algae growth and has created an oxygen-starved hypoxic ‘dead zone’ that last year covered 8,700 square miles in the Gulf.

“The Mississippi River Basin is unfortunately a victim of bad agricultural practices and our family was probably part of that problem. We used to plow everything. Using heavy tillage on these sensitive soils and steep slopes is a disaster. Unfortunately a lot of our precious soil ended up in the valley and/or in the Mississippi,” Rod says.

“Unless we change our practices … we're not going to make the problem any better. But by doing less tillage and more rotational grazing, and cover crops, you can increase organic matter and improve your water quality. Stopping soil loss is money in the bank for a farmer.”

Rod believes sustainable agriculture can “revive rural America” by making it viable for more small farmers like him to make a living.

“We’ve got to take it one watershed, one farm at a time,” he says.

Roots of Conservation is a series of stories about the people working to address threats to water quality and soil health in the Mississippi River Basin and find conservation solutions that make economic sense for people and communities.
Learn More
Comments
Log in to post a comment...
Recent Stories