In Fly Fishing Hotspot, Partnerships with Landowners Save Water, Trout 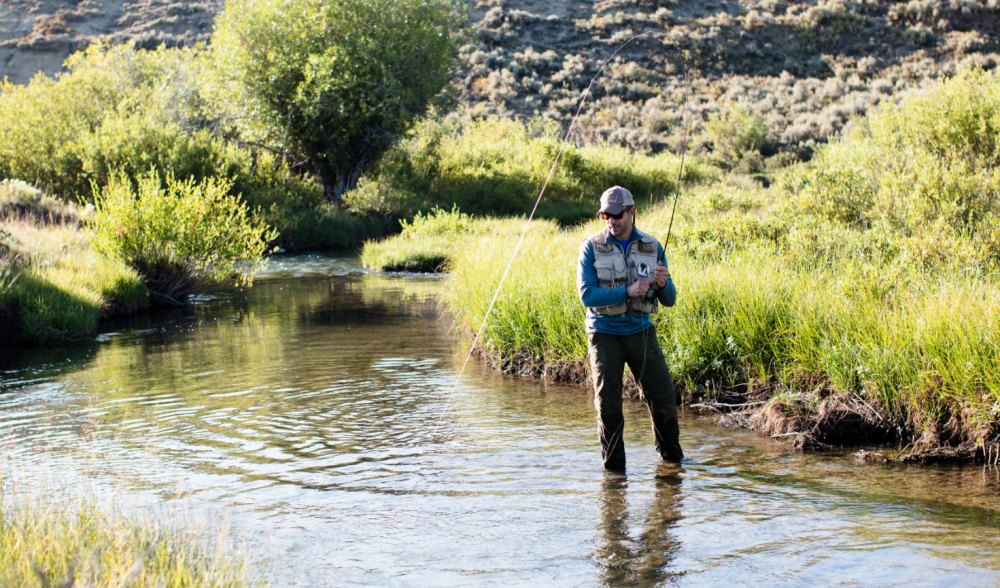 Ranchers, conservationists work to create a water market that benefits ranchers and fish

Scott Yates peers into a deep pool of slow-moving water in one of the finest wild trout streams in western Wyoming, aims his fly-fishing rod and releases a bow-and-arrow cast.

The fly strikes the water and a moment later Scott’s line draws taut, the rod bends and he reels in a 12-inch Colorado cutthroat.

“Fishing is what I love. I am just addicted to it. Have been for most of my life,” says Scott, admiring his catch before releasing it back into the creek.

Grinning, Scott says he feels blessed that his job gives him the opportunity to indulge his passion.

The search for innovative ideas is driven by fears of future water shortages – and conflicts – in a region where a rapidly growing population, extended drought and changing weather are all combining to threaten supply. Declining snow pack and water supply also puts critical fish and wildlife habitat at risk.

Because the system, agricultural producers and fish all need water, there is significant incentive for cooperation among different stakeholders.

Some of the most promising water management solutions are being tested along the mountain-fed tributaries of the upper Green River, near the headwaters of the Colorado River system.

For more than a century, farmers and ranchers in Wyoming’s high desert rangeland have relied on irrigation water from these streams to raise crops and cattle, sustain their livelihoods and build the state’s agricultural economy.

Trout Unlimited has worked with landowners to construct fish passages to prevent trout from getting stuck in irrigation ditches and save water by improving the efficiency of aging canals, some of which were dug in the 1880s.

Over the past three years, the conservation organization has also focused on helping landowners enroll in the System Conservation Pilot Program, which compensates ranchers and farmers in the upper and lower Colorado basin for voluntarily reducing water consumption.

Started by the Bureau of Reclamation and large municipalities including Denver and Las Vegas, the program aims to help stabilize water levels in Lake Mead and Lake Powell. In Wyoming, landowners are paid to stop irrigating in early July when mountain runoff is lighter and trout benefit most from having more water in the stream.

“In higher elevation country like the upper Green River, ranchers have shown remarkable interest in marketing late-season water flows. It’s after haying season and their crop is already baled and harvested, so they have less need to irrigate,” Scott says. “That’s good news for fish because the water that flows in late July, August and September is of really high value to them – especially during drought years.”

If streams become too shallow, water temperatures rise and trout die off. Streams can dry up and become disconnected from the main stem of the Green River.

The Walton Family Foundation supports Trout Unlimited as part of its strategy to address the supply/demand imbalance of water throughout the Colorado River basin, which includes pursuing a flexible market-based water management system in cooperation with the agricultural community, rewarding water efficiency and restoring targeted flows.

Whether conversations about water management in the West occur in major cities, ranch houses or small town bars or coffee shops, they have the potential to stir controversy.

“These rural communities depend on that resource for their livelihood. It’s a hot bed issue,” Scott says.

The key to getting buy-in from landowners on reducing water use, he says, is to design a solution that adds value to their operation.

“The goal is to create a market so if it makes economic sense for a landowner to take land out of production – temporarily, on a voluntary and compensated basis – they can choose to leave the water in the stream,” says Scott. “That improves the overall reliability of the Colorado River system and provides maximum benefits for both ranchers and fish.”

Trout Unlimited staff work in small agricultural communities throughout the West, so they can build personal relationships with landowners and listen to their concerns and ideas.

“You have to bring something to the table that works for the community,” Scott says.

“The potential with water markets is that water can be acquired temporarily. The water right stays attached to the land. That’s important for landowners.”

For Scott, the personal reward is seeing the tributaries feeding the upper Green River remain healthy and viable for fish.

“The small streams draining out of the Wyoming Range support some of last native habitat for Colorado River cutthroat trout populations,” he says.

Many of these streams are no wider than a one-lane road but produce trout 16 inches long.

“That signifies that the fish have everything they need. The water is clean, and there’s enough of it, for the most part,” he says.

“You can’t get any closer to great fly fishing than right here. It is truly one of the last great places.”