Wendy Johnson walks slowly through a field of ripened soybeans, running her fingers across the top of the pods, her eyes fixed on the horizon as she explains why Iowa has such a hold on her heart. Even on a grey and damp autumn day, she can see for miles in every direction. 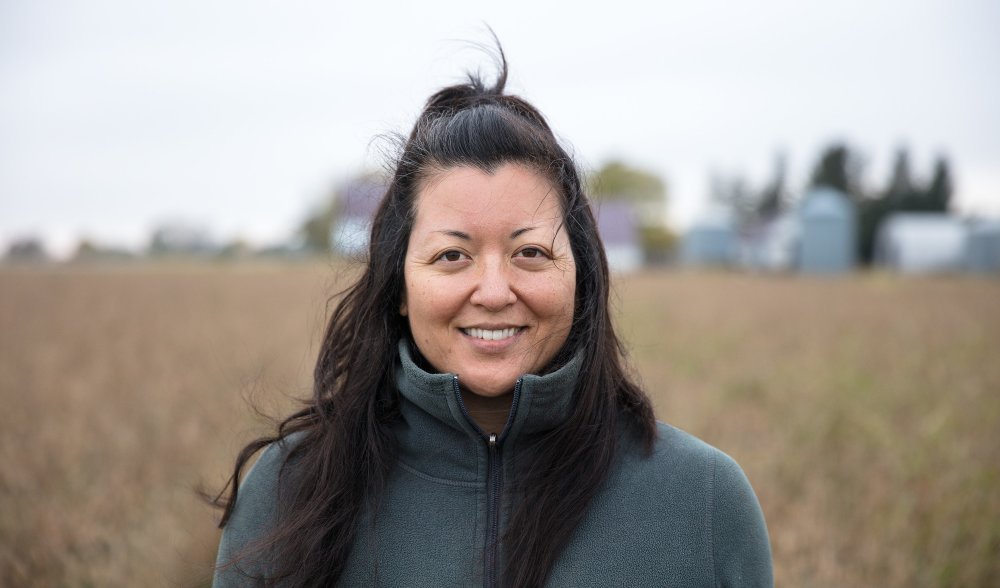 Roots of Conservation: Wendy Johnson
As owner and operator of Jóia Food Farm near Charles City, Wendy Johnson is literally working at the grassroots level to ensure Iowa maintains a bright future in farming.

“I love living in Iowa because of the sheer amount of sky and land. I can look across a landscape, and sometimes it feels like an ocean,” Wendy says. “I love the open spaces. I love the freedom. And I love that Iowa is a state that grows food. We have some of the best soils in the world and our potential is limitless.”

As owner and operator of Jóia Food Farm near Charles City, Wendy is literally working at the grassroots level to ensure Iowa maintains a bright future in farming – which she believes can be ensured by adopting sustainable agricultural practices that improve soil health and water quality.

Wendy grew up on her family’s conventional corn and soybean and hog farm but left to attend for college, before moving to Los Angeles to pursue a career in the fashion industry. But she kept feeling Iowa pulling her back home.

In 2010, Wendy moved back to the state with her husband, Johnny Rafkin, to help manage her parents’ farm. The couple moved into Wendy’s grandparents’ place, two miles from her parents, and launched an organic farm to raise crops, pasture and livestock.

Every morning, she wakes up to the sights and sounds of animals in her farm yard and barns: Strutting Royal Palm and Narragansett turkeys, waddling Muscovy ducks, a variety of laying hens, Freedom Ranger chickens, Dorset and Il de France sheep and Berkshire and Gloucestershire Old Spot pigs.

“I became a farmer because I wanted to grow my own food. I wanted to be part of a movement that is changing Iowa agriculture from a corn/soybean monoculture to a more diverse system,” Wendy says.

“There are practices that we need to implement if we want to grow healthy food. We have to be good stewards of the land.”

In a state where corn and soybeans are king, she and her husband are diversifying their row crop operation by adding small grains such as oats and barley, and perennials like alfalfa, clover and a mix of grasses into their crop rotation. To hold nutrients and improve soil health, they also plants cover crops – often a mix of canola, lentils, cereal rye, winter barley or oats – that grow through late fall and into the winter.

Cover crops are effective at controlling weeds, which allows Wendy to eliminate the use of herbicides. They prevent soil erosion by keeping plant ‘roots in the ground’ in cool seasons when corn and soybeans aren’t growing. They help hold water, making land less susceptible to drought. And they increase organic matter that reduces the need for fertilizer and increases the soil’s water-holding capacity, absorbing nutrients that might otherwise leach into rivers and streams.

“I want to have something growing out there all the time, something green. Our soils are such a gift. Sometimes I think we take that for granted,” she says.
“Iowa has some of the richest soils in the world, and we grow the same things over and over. We don’t actually realize we are stripping them of their nutrients. I want to be helping regenerate soil.”

Soil tests have shown a slow increase in organic matter since Wendy began growing cover crops and transitioning to organic practices. She views her adoption of sustainable agricultural practices as an investment that will pay economic dividends through improved soil health.

As a board director with Practical Farmers of Iowa, a Walton Family Foundation grantee, Wendy promotes the benefits of cover crops and other conservation practices with the organization’s 3,000-member network.

She is also conscious of the impact her farming practices have on people and ecosystems downstream in the Mississippi River basin, where water quality has been degraded by decades of excess nutrient runoff.

She believes in the golden rule of farming proposed by conservationist, author and farmer Wendell Berry, who said, “Do unto those downstream as you would have those upstream do unto you.”

“They're all interconnected, and everything that we can do on our farm, absolutely affects things going on in the bigger river. It’s part of our responsibility to make things better.”