For each of his 63 years, Tim Smith has lived on his family’s farm outside Eagle Grove, Iowa. He wakes up every morning in the house he grew up in, watches the sun rise over familiar fields and sees its set over the same Midwestern horizon. 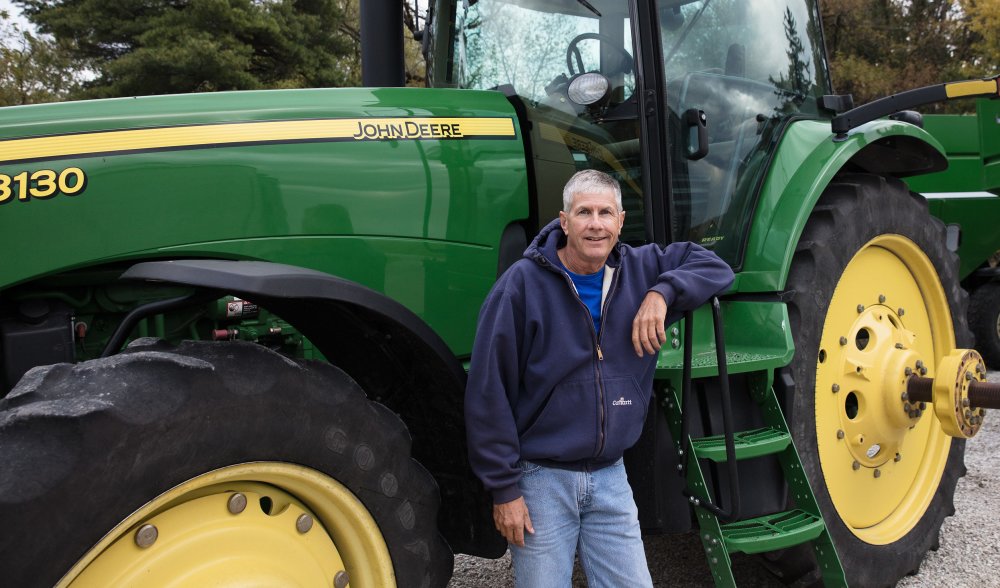 Every year brings renewal: Green shoots of corn and soybeans that pop from the soil in the spring, rise tall over the summer and then ripen in the fall.

It’s an agricultural cycle that carries both the promise of prosperity and potential for disappointment. For all of farming’s challenges and uncertainty, though, Tim can’t imagine himself doing anything else.

“What makes the farm special? It’s been my life. It’s been my livelihood. You get attached to something when you’ve lived in the same place all your life,” he says.

Tim’s attachment to the land – and his respect for it – guides the way he manages his 800 acre-farm, part of which has been in his family since 1881.

“I have one of the most important occupations in the world, being a farmer,” Tim says. “Without the soil, and without rainfall, we have nothing. I see the value in the soil, so my passion has been to protect the thing that provides my livelihood.”

For more than a decade, Tim has employed several conservation practices to improve soil health and water quality, reduce nutrient loss and prevent erosion. His implementation of sustainable agricultural practices began at the “edge of the field” but has since moved to the heart of his operation.

Concerned about soil erosion in the early 2000s, Tim switched to strip tillage that disturbs less soil and reduces the potential for soil loss during heavy rains.

He has planted in-field ‘prairie strip’ buffers to slow the flow of water off his field to prevent soil and nutrient loss. Along Eagle Creek, which runs through his farm’s ‘back 40,’ Tim has seeded another wide strip of 30 different species of prairie plants that act as a natural filter. He has also installed wood chip bioreactors on drainage tiles at the edge of his fields to filter nitrates from runoff water.

His concerns about water quality grew after testing found he was losing significant nutrients from his land despite active management. Tim realized then the impact of agricultural nutrient loss on the Mississippi River Basin and in the Gulf of Mexico.

While Iowa can seem far removed from the Gulf, everything is connected. Eagle Creek flows into the Boone River, which flows into the Des Moines River and then the Mississippi River.

“When I heard about Gulf hypoxia and nitrates in the water, I’d think, ‘Where is it all coming from?’ I blamed it on the urban populations,” he says. “But I realized it’s coming from the agricultural land. The reason so much nitrate is leaching from our soil is because there is nothing growing for much of the year.”

As a solution, Tim has planted cover crops on about 550 acres since 2011 to improve the quality of the soil, increase the land’s ability to hold water and reduce the amount of nutrients washing downstream.

Last fall, he seeded a cover crop ‘cocktail' of cereal rye and radish into his corn.

The cover crop grows through the fall until the ground freezes before being killed in the spring prior to planting. Cereal rye sequesters nitrogen that otherwise would wash into streams. The radish sends down long roots and pulls nitrates out of the soil.

“The solution to the water quality problem is going to happen in the field,” Tim says.

He has been working with the Soil Health Partnership, a Walton Family Foundation grantee, to quantify the soil benefits created by cover crops. After his first year planting cover crops, nitrate levels in the water flowing out of his drainage tiles dropped significantly even though heavier rains made stream levels higher.

Not only do these crops prevent soil erosion and improve water quality, they also suppress weed growth.

“Cover crops are the corner post of a nutrient reduction strategy,” Tim says. “We can grow row crops and still have conservation practices in the same farm, the same field, the same area."

He is convinced the long-term economic payoff in healthier soils and reduced erosion will keep farming viable well into the future. Iowa, he notes, has lost an alarming amount of topsoil to erosion over the past century.

“My family has owned this farm for 130 years, but where are we going to be in another 130 years,” he says. “Agriculture needs to step up to the plate and make these changes.”